What is the Difference Between Adventists and Jehovah’s Witnesses? 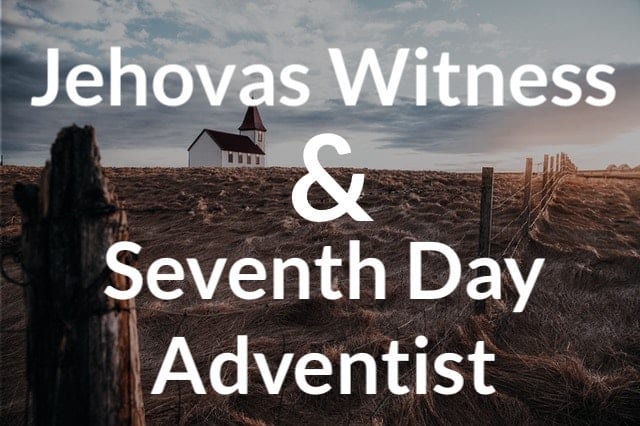 Both Christian denominations stemmed from the same religious movement. There are several core beliefs that separate the two. These core beliefs include the subjects of The Second Coming, biblical beliefs, diets and even what kinds of entertainment to take in!. Though they had similar beginnings, they’ve grown into their own groups with varying beliefs, habits and practices. In the end, members of both groups believe in Christianity, though have their own take on the religion.

WHAT SIMILARITIES DO ADVENTISTS AND JEHOVAH’S WITNESSES HAVE?

The similarities between the two groups can be traced back to their origins. Both SDA, or Seventh Day Adventists, and Jehovah’s Witnesses were born out of “The Great Disappointment” of 1844. During this event, preacher William Miller believed that the Second Coming of Christ was near.

When Jesus failed to appear, his followers split into different groups, including those of SDA and Jehovah’s Witnesses, among others.

Still, both SDA and Jehovah’s Witnesses follow these below essential beliefs:

These are the most common beliefs that the two denominations share, though some particular groups may differ slightly in their interpretations. For instance, some members have adopted certain parts of the Bible to meet expectations of contemporary times.

WHAT DIFFERENCES DO ADVENTISTS AND JEHOVAH’S WITNESS HAVE?

It seems that both Adventists and Jehovah’s Witnesses share a lot of similarities. What makes them at all different? There are as many philosophical differences then there are habitual differences that make each denomination unique in its own way.

The BBC has a great article here

But it is not just the beliefs that differ the two groups. The members’ habits, lifestyles and rituals are also fundamentally different.

For instance, Adventists cannot listen to any radio programs or watch any television shows or movies that are not uplifting and do not have good social values. In fact, many Adventists believe that it is the modern-day shows and entertainment that are causing moral decay.

On the other hand, Jehovah’s Witnesses aren’t banned from listening to or watching any specific programs or shows. Rather, they are able to explore entertainment and make up their own mind as to what is considered appropriate or inappropriate. This is meant as a kind of guidance and affirmation of beliefs. Facing potentially inappropriate or unrighteous material should only work to deepen one’s faith.

Another huge contrast includes the celebrations of certain holidays. Jehovah’s Witnesses are more strict in this sense. The members of this denomination are banned from celebrating any national holidays that stray from any biblical teachings. View Jehova Witness Holidays These in clude national and political holidays such as Veterans Day and Independence Day, as these holidays are associated with war, a concept not supported by the Jehovah’s Witnesses.

Perhaps surprisingly, Jehovah’s Witnesses also don’t celebrate birthdays, as they can be seen as being distracting from biblical teachings. Instead, many celebrate their ‘spiritual birthdays,’ or days when they decided to dedicate their lives to Christ.

Adventists, on the other hand, can celebrate some religious and spiritual holidays. For example, Christmas is seen as a celebration of Christ. Read the Adventist churches Statement on Christmas

While Adventists don’t see the 25th of December of Jesus’ true birthdate (as it is not written in the Bible), they spend the holiday reflecting on Jesus himself. In fact, some Adventist churches will hold Christmas celebrations and festivities to get into the spirit. In the same vein, Adventists can celebrate Easter as a recognition of religious practices, but do not celebrate Pagan celebrations like Halloween.

WHAT ARE THEIR BELIEFS ABOUT THE SECOND COMING?

On the other hand, Jehovah’s Witnesses believe that Jesus will arrive as a spiritual being and that his presence will be more subdued.

Neither denomination knows the exact date and time of Jesus’ arrival, but believe in being prepared for it by living moral and righteous lives. As a result of ‘The Great Disappointment,’ members are also against deciding on a specific time and date so as to not suffer another disappointment. When Jesus arrives, He will bring the righteous to Heaven, and the unrighteous will die.

Adventists and Jehovah’s Witnesses differ in how they approach Holy books. The Adventists center their focus on the Bible, taking it as completely historically accurate, and a guide for living a good life. Adventists follow ‘ 28 Fundamental Beliefs’ that make up the structure of their lives. These beliefs include guidance on marriage, unity, death and sin. The beliefs also give guidance on every stage of an individual’s life, from youth to death, as well as descriptions of how the New Earth will be.

On the other hand, Jehovah’s Witnesses have taken on their own version of the Holy Book, named the ‘ New Testament.’ Read about Jehovas Witness Books. This New Testament is focused on Christian beliefs, whereas the Old Testament consist of Hebrew beliefs. It works as a translation of a new translation of the Holy Scriptures. Jehovah’s Witnesses believe in a set of critical beliefs, including sin, death and unity like Adventists.

WHAT DOES EACH RELIGION BELIEVE ABOUT DIET?

Diets: they may not be the first thing people think of when it comes to religion, but both Jehovah’s Witnesses and Adventists follow specific diet guidelines. By following this guidance, members can ensure they are both respecting their bodies, as well as their souls, an important practice in ensuring one follows a righteous life.

Read Everything About The Adventist Diet

Adventists follow a strict diet [https://www.seventhdayadventistdiet.com/what-do-seventh-day-adventists-eat/] that is meant to promote good health and encourage healthy behavior. The typical Adventist will have a vegetarian or plant-based diet, avoiding meat, as God provided plants for food in the Bible.

Some members do eat certain types of meat, including chicken, turkey or beef. Adventists also believe that food intake is not only healthy for the body, but also is healthy for the soul. Therefore, members should not use tobacco, recreational drugs or drink alcohol. Besides food and drink, Adventists also make sure to incorporate exercise, fresh air and sunlight into their everyday lives. Any potential mental health issues can be solved by studying biblical teachings.

How about Jehovah’s Witnesses?

These members have a more lenient diet . While having a plant-based diet is recommended, Jehovah’s Witnesses can eat meat as long as its a reasonable amount, including red meat as well. Members can also enjoy a soda or sugary drink, though, like meat, members are encouraged to not take in these beverages in excess. As for smoking, this denomination believes that cigarettes are discouraged by biblical teachings. Also like Adventists, Jehovah’s Witnesses believe in keeping active and motivated to be completely healthy. Like Adventists, mental health can be addressed and solved through the teachings of the Bible and Christ.