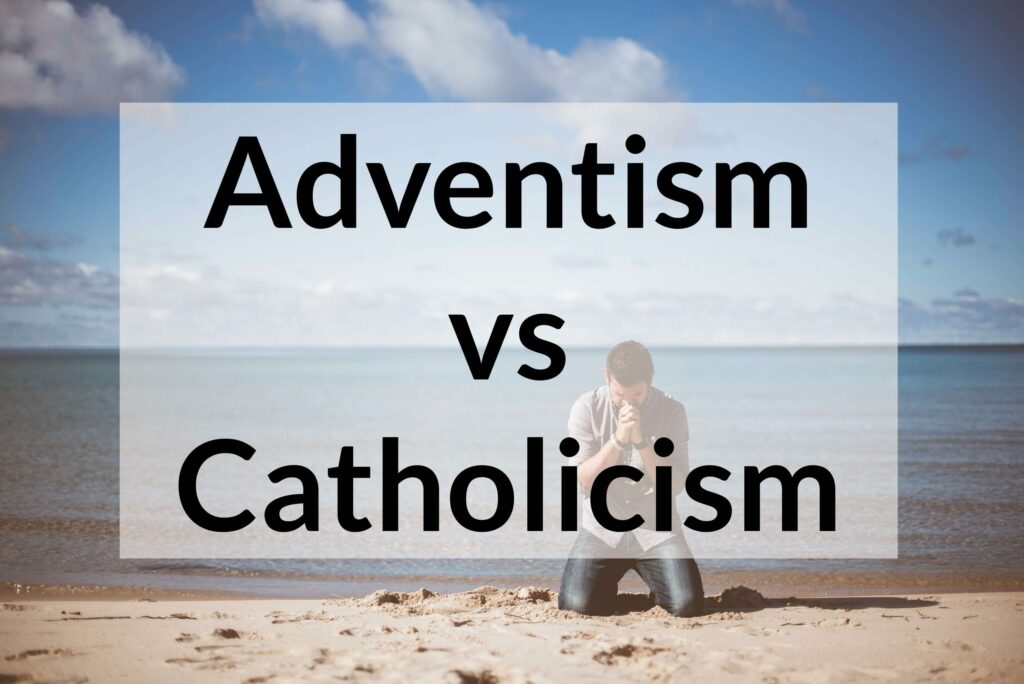 While the Adventists and Catholics follow the same teachings but they have a few very different practices and beliefs in comparison to Catholics. These large differences include diet, the afterlife, dress, and forgiveness. The most prominent difference is the day the Adventists assign for worship. This is Saturday for Adventists as compared to Sunday for Catholics.

Many people are aware of these common discrepancies. However, there are a few other differences as well that we are going to discuss in this post. So, let’s get started.

DIFFERENCES BETWEEN ADVENTISTS AND CATHOLICS

Adventists have evolved from the same biblical roots of the teachings of Jesus Christ, so they share a lot of the same beliefs. In fact, they even consider Catholics and others on the same level as them, but the difference arises in terms of the protest. They identify themselves as protestants, and thus they have moral and religious values that somewhat differ from Catholicism.

Let’s take a look at some of the key differences between Adventists and Catholics you may not have known about.

However, Seventh-day Adventists do not believe that. The teachings of Jesus Christ and their founder Ellen G. White’s works suggest that the day of fellowship should be observed on Saturday, which is why there is a gap of a whole day between the prayer day for Adventists and Catholics. Read about Adventist Beliefs Here

However, Catholics do have that belief. According to the Catholic Church, God has made souls always remain alive on the Earth in some form even after the death of an individual.

Both religions have strict rules on clothing and attires for days of fellowship and worship activities. Any revealing clothes or inappropriate wear is not allowed.

However, Catholics are more lenient on this. Adventists, however, under no circumstance allow any bending of the attire rule and make sure the sanctity of a worship activity is maintained through the humility of the clothing of the people attending that activity.

There’s one more difference between Adventists and Catholics, and it might be the strongest one of all of these. Adventists believe that human beings are judged at every step of their life by God to be forgiven or forsaken. But, on the other hand, Catholics believe that God is so merciful that He will only judge the souls of the people after their death when they arrive at the Gates of Heaven. Heaven is also highly disputed

If we’re talking about Jesus Christ coming back to Earth, then to that point, the belief about the second coming is arguably the same among Adventists and Catholics.

According to famous Adventist Scholars, Jesus Christ’s second coming will be personal and interactive with the world’s people where he will take the good and righteous with him to heaven and the unrighteous would die.

After the second coming events, Satan and his worshippers will inhabit the world for more than a millennium. At the same time, the righteous will live in Heaven, as the day of reckoning comes when Jesus Christ and the people of Heaven would descend to the world and get rid of all the sin and sinners.

Catholics, however, tend to have a more forward prophecy of the second coming. According to the Catholic religion, Jesus Christ will descend from the heavens, and it will be the sign of the end of times for all the good and the bad within the world.

These slight differences in the interpretation of the second coming prophecy make both Adventists and Catholics very different in comparison. But it also shows that the main beliefs and roots of the Catholic Christians and the Seventh-day Adventists are the same, with only the practices and values differing in some cases.

Christians and the many protestants that came out of the Catholic religion tend to fixate their beliefs and values upon the teachings of Jesus Christ and the Holy Bible. Still, the SDA tends to make up their values with a side influence.

Catholics believe that the Holy Bible is the true word of God and all the things in there are nothing but the whole truth. However, Seventh-Day Adventists also consider the guidance and written works of their founder Ellen G. White.

This is a matter of controversy among most Christians and Catholics who often stand against this calling Adventists, members of a cult. That is not taken kindly by Adventists. These are the profits of Adventism

Adventists consider Ellen G. White a revolutionary protestant who led them to have their own identity, which is why they study the ideas and works of Ellen like The Great Controversy, The Desires of Ages, etc., by the teachings of the Bible.

WE HAVE AN ENTIRE CATEGORY DEDICATED TO ADVENTIST DIET

If you’re not familiar with the dietary rules and regulations of the Holy Bible, you must know that gluttony is considered one of the seven deadly sins. In addition, excess of any food is considered bad, specifically the food in the religion of Catholicism.

Here are Adventist beliefs on meat

But if you take a look at the diet of Catholics, you’re going to find a healthy balance of all kinds of food groups. Of course, consumables like Tobacco and Wine are frowned upon, but most Catholics have these things in their daily diet because of the leniency of the Churches.

However, in terms of dietary restrictions, Adventists are very strict. Smoking and drinking are strictly prohibited, and no dedicated SDA includes these things in their diet. So much so that Adventists aren’t even allowed to eat red meat. Instead, their diets are mostly vegetarian or vegan.

To give you a more in-depth understanding of the Seventh-Day Adventists and their way of life, I’ve made a list of facts that are worth sharing. Let’s take a look at them right now.

· Seventh-day Adventist Church is one of the biggest protestant Christian groups with over 18 million followers as of 2021.

· Their founder, Ellen G. White, has written many books on Jesus Christ and his life. Some of his best work is lauded by writers and literary people even outside the Adventist group of Christians.

· Adventists are one of the protestant groups of Christians known for their incredible charity work, school and education projects, and many other accomplishments around the world.

· SDA is the only protestant group of Christians out of many who observe the day of worship on Saturday, which they consider the Seventh Day of the Week, also known as the Sabbath in the Holy Bible.

Want to know more about Catholicism and its followers; Here’s a list of factoids that would help you gain a better understanding of the religion if you’re thinking of studying it:

· Catholicism is the largest denomination of the Christian religion, with over 1 billion baptized Catholics worldwide. This religion is the second most common in the world after Islam.

· The Church of Catholicism is led by the Pope of the time, who resides in the Vatican City in Europe; however, the worshippers and followers of the religion can be found throughout the world.

· The current Pope of the Catholic Church is Pope Francis; however, according to the Biblical scripture, the first Pope was Saint Peter, as mentioned by Jesus Christ himself.

· Catholics are known for their compassion for people and their leniency towards sinners as they claim that Jesus Christ laid his life to forgive the sins of people all over the world.

· The origin of the Catholic religion was 2000 years ago by Jesus Christ and his followers. Since then, this religion has been widespread all over the world and adapted to many eras.

Although many of the religious beliefs, roots, and purposes of Adventists and Catholics are the same, some differences make these religions vastly dissimilar. If you weren’t very knowledgeable of the relationship between these religions before, I hope I could bring you the knowledge you sought. May you walk on the right path and achieve glory.

PrevPreviousAdventist vs Mormon (What is the difference)