Do Adventists Eat Shellfish? (what the Bible says) 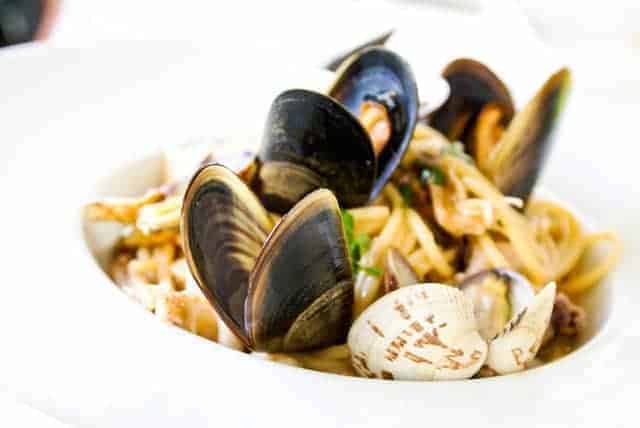 Seventh-Day Adventists follow a diet allowing them to eat only clean meats and fishes based on the Leviticus 11 dietary restrictions. They do not eat shellfish or pork.

According to the Bible, in Leviticus chapter 11, God clearly lays out the type of animals we should use as foods, categorized as clean and unclean meats. It clearly states that animals that chew the cud and have split hooves can be used as food, while sea creatures that have fins and scale can also be consumed.

When it comes to sea creatures such as oysters and she fish, they do not fall into the clean category.

Read the full guide on the Adventist Diet

The early years of Adventism were characterized by health reformers such as Ellen G White, James C Jackson, and J N Loughborough, among others. Rusell Trall, in his 1857 Hydropathic cookbook, describes all mollusks, including oysters and shellfish, as harmful ailments.

A book that Seventh Day Adventists hold dear is  James C Cook’s book, “Health: How to Live,” that was re-printed in conjunction with James and Ellen White. Jackson was extremely disapproving of oysters and shellfish as belonging to the scavenger family

Loughborough stated that all shellfish and oysters were objectionable, containing little nutritional value and hard to digest.

Finally, In 1891, Kellog added his two cents regarding shellfish as the lowest of scavengers and containing a potent poison known as tyrotoxicon.

It’s quite evident that over the years, what Adventists eat make a difference. They follow God’s original plan for mankind, the appropriate plant-based healthy diet.

What are some of the health risks associated with eating shellfish?

Seventh-Day Adventists are known to lead a healthy and long life due to a strict dietary regime void of meats. One of the primary reasons that they opt not to partake in oysters and shellfish are highlighted as below;

Almost all types of shellfish contain mercury in varying quantities. Although consuming shellfish isn’t detrimental to most people. There’s a particular group that is more susceptible to effects, and that includes pregnant mothers and young children. Exposing them to mercury may affect their nervous system while causing organ failure in adults due to consistent consumption. Further, shellfish may contain metals, pesticides, and other contaminants in water.

This is a significant concern while partaking in such types of seafood. Shellfish and other kinds of seafood are associated with salmonella, E.Coli, and Hepatitis A virus arising from sewer contaminated water. In as much as it may affect anyone who comes into contact with such foods, there exists a particular type of condition that may make such encounters detrimental. Such circumstances include; a suppressed immune system, gastrointestinal issues, diabetes, and liver disease. It would be advisable to keep away from such types of foods to avoid such incidences.

based on Food Allergy and Anaphylaxis Network’s data, approximately 7 million Americans are allergic to shellfish. 60% of them do not experience an allergy until into their adulthood. Such allergic reactions start within minutes of eating the shellfish and may be characterized by sneezing, itching, dizziness, wheezing, and swelling of the lips and mouth. In some cases, such reactions may be life-threatening. The only option is to steer clear from it or consume fin fish.

A typical Adventist diet tends to discourage the consumption of such sea creatures, obviously due to their health complications. But probably the most burning question is, does adventism advocate for the consumption of meat? Yes, it does.

Seventh Day Adventists follow a diet allowing them to eat only clean meats and fishes based on the Leviticus 11 dietary restrictions. They do not eat shellfish or pork.

Yes, shrimp and oysters are classified as shellfish.

Some Adventists do eat meat, but many are vegetarian, choosing to rely on a diet of grains, nuts, and vegetables.

List of Meats that Adventists can and Cannot consume

Scientific research suggests that plant-based nutrition based on vegetables, fruits and nuts is the best for the human body. Since the body is the temple of the Holy Spirit, Adventists uphold such a dietary regime (1st Corinthians 6:19).

However, the Bible makes provisions for eating certain types of clean meats, as highlighted in Leviticus 11 and Deuteronomy 14. Ruminant animals with split hooves and sea creatures with fins and scales are preferred. However, God’s plan was for mankind to have a plant-based diet (Genesis 1:29 and 3:18). It was God’s perfect ideal for his people.

Animals such as pigs, vultures, and bears among others categorized by the doctrinal laws come across as unpalatable since they prey on already dead flesh, sickly or weaker animals in a herd. Sea creatures such as crabs and oysters are bottom dwellers and scavenge on already dead Sea creatures. Shellfish, oysters, mussels, and clams similarly do feed on dead matter hence strictly forbidden by the Bible. Feasting on such animals that already feed on dead flesh means ingesting unclean food that would be toxic to our bodies.

The old Testament laws lay bare the rules regarding the consumption of clean and unclean meats. One was not to touch unclean animals and had to cleanse themselves in case they did.

However, there exists a common misconception about peter’s dream where he saw a sheet descending from heaven with all types of animals, from creeping creatures, birds, and four-footed animals (Acts 10:11-13). Upon God’s command that he should kill them and feed, he insisted that he has never eaten anything unclean, to which God responded that he had already cleansed them. At this point, many jump to the conclusion without following it through to the end. Peter later learned that the vision was meant not to sideline the Gentiles by calling them impure, hence baptizing them.

Many theological scholars indicate that the Old Testament laws underwent changes in the New Testament through Christ’s crucifixion. Christ said that it’s not what goes in a man that makes him impure but rather what goes out of him.

Such law forms the basis of modern-day religion and their dietary habits. Since the laws were changed, Christians live without fear since the old laws don’t apply anymore. However, it still proves beneficial to stick to God’s original plan.